Psoriasis is a disease in which red, scaly patches form on the skin, typically on the elbows, knees, or scalp. An estimated 7.5 million people in the United States have the disease, most of them between the ages of 15 and 30. Many people with psoriasis experience pain, discomfort, and self-esteem problems that can interfere with their work and social life. 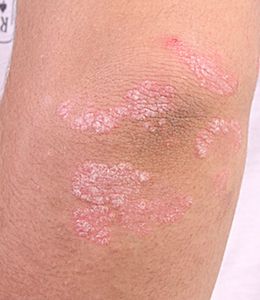 Although the exact cause of psoriasis is unknown, researchers say the disease is largely genetic, caused by a combination of genes that send the immune system into “overdrive,” triggering the rapid growth of skin cells that form patches and lesions.

Your doctor or dermatologist will be able to determine the difference between psoriasis and eczema, but to the untrained eye, these skin conditions can appear to be very similar. Generally speaking, psoriasis appears as thick, red patches that have a scaly buildup on top. These lesions are usually well defined, whereas eczema tends to cause a rash and be accompanied by an intense itch.

Psoriasis tends to occur on the outside of the knees and elbows, and on the lower back and scalp.  Eczema usually covers the elbow and knee creases and the neck or face.

Psoriasis can range in severity, from mild patches to severe lesions that can affect more than 5% of the skin.

There are five types of the disease:

Plaque Psoriasis:  Appears as red patches with silvery white “scales,” or buildup of dead skin cells, called plaques. It’s the most common type of psoriasis, affecting up to 90% of all people with the disease, according to the AAD. Most often found on the scalp, elbows, lower back, and knees, the plaques themselves will be raised and have clear edges; they may also itch, crack, or bleed.

Pustular Psoriasis: A form of psoriasis in which white pustules (or bumps filled with white pus) appear on the skin. In a typical cycle, the skin will turn red, break out in pustules, and then develop scales. There are three types of pustular psoriasis: von Zumbusch pustular psoriasis (which appears abruptly and can be accompanied with fever, chills, and dehydration), palmoplantar pustulosis (which appears on the soles of the feet and the hands), and acropustulosis (a rare form of psoriasis that forms on the ends of the fingers or toes).

Guttate Psoriasis:  A type of psoriasis that appears as red, scaly teardrop-shaped spots. (The word guttate is Latin for “drop.”) During a flare-up, hundreds of lesions can form on the arms, legs, and torso, although they can also appear on the face, ears, and scalp. Guttate is the second most common type of psoriasis, occurring in about 10% of all people with the disease. It’s most likely to appear in people who are younger than 30, oftentimes after they develop an infection like strep throat.

Inverse Psoriasis: Inverse psoriasis is a type of psoriasis that appears as smooth, bright red lesions in the armpit, groin, and other areas with folds of skin. Because these regions of the body are prone to sweating and rubbing, inverse psoriasis can be particularly irritating and hard to treat.

Erythrodermic Psoriasis: Is rare but can require immediate treatment or even hospitalization. The lesions look like large “sheets” rather than small spots, as if the area has been burned, and tend to be severely itchy and painful. A flare-up can trigger swelling, infection, and increased heart rate.

The simplest answer to the question of what causes psoriasis is genetics. An estimated 10% of people inherit at least one of the genes that can cause psoriasis. (There are as many as 25 genetic mutations that make someone more likely to develop psoriasis.) But only 2% to 3% of people will develop the disease. Therefore, researchers believe that psoriasis is caused by a certain combination of genes that spring into action after being exposed to a trigger. Common triggers include stress, an infection (like strep throat), and certain medications (like lithium). Cold, dry weather and sunburns may also trigger psoriasis flares.

When someone with psoriasis is exposed to a trigger, their immune system scrambles to defend itself by producing T cells, a type of white blood cell that helps ward off infections and other diseases. With psoriasis, however, T cell-production goes into overdrive, eventually causing inflammation and faster-than-usual growth of skin cells, leading to psoriasis symptoms.

The signs and symptoms of psoriasis vary depending on the type and severity of the skin disease. Some people may have one form of psoriasis, while others can have two or more.

Areas of the Body Affected

Areas of the body normally affected by psoriasis are the:

For the millions of people who have psoriasis, the skin condition can pose many challenges. Not only can the pain and itching interfere with their ability to sleep or work, but research shows that many people with psoriasis feel self-conscious about their appearance and may tend to withdraw from their friends and family, and become isolated.

People with psoriasis are also twice as likely to suffer through depression, and can even be more likely to have suicidal thoughts. If you’re feeling a loss of energy, lack of interest in once-enjoyable activities, or an inability to focus, talk to your doctor about whether you may have depression or should see a mental health specialist.

There are no special diagnostic tests for psoriasis.  A psoriasis diagnosis is made by a dermatologist, who will examine the skin lesions visually. In some cases, psoriasis can resemble other types of skin conditions, like eczema, so doctors may want to confirm the results with a biopsy. That involves removing some of the skin and looking at the sample under a microscope, where psoriasis tends to appear “thicker” than eczema.

Doctors may also take a detailed record of your family’s medical history: About one-third of people with psoriasis have a first-degree relative who also has the condition. Health care providers may also try to pinpoint psoriasis triggers by asking whether their patients have been under stress lately or are taking a new medication.

A Cure for Psoriasis?

Sadly, there is no cure for psoriasis available at this point in time. As a chronic autoimmune disease, most people with psoriasis will always have it. But it is possible to treat the condition. In fact, the right medications and therapies can reduce symptoms and even clear up the skin entirely in some people.

More psoriasis treatments will be available in the future, and researchers are currently trying to uncover what causes the lesions on a cellular level and how to prevent flare-ups caused by the immune system.

As with treating many health conditions, there is no “one-size-fits-all” type of psoriasis treatment.  Each case is different and the medications that work for some people may not work for others. The goal is the same for everyone – to find psoriasis medications that can reduce or eliminate psoriasis symptoms.

Here are some of the most commonly prescribed therapies:

Topical medications. The most common form of therapy for mild to moderate conditions are topicals in cream, gel, and ointment forms. They are applied directly to the skin in the hopes of reducing inflammation and slowing down skin cell growth. Some are available over-the-counter, like products with salicylic acid and coal tar as active ingredients, while others, like Calcipotriene (a form of vitamin D3) and Tazarotene (a vitamin A derivative known as a retinoid) are available by prescription. There are also special psoriasis shampoos that can help clear up scalp psoriasis, many of which contain coal tar and salicylic acid.

Phototherapy. Also called light therapy, phototherapy exposes a person’s skin to ultraviolet light, which is thought to kill the immune cells contributing to psoriasis. Phototherapy can be administered in the form of UVB rays, a combination of UVA and UVB, or UVA rays alongside an oral or topical medication called psoralen (a treatment called PUVA). These treatments, however, must be done in a doctor’s office, a psoriasis clinic, or with a specialized phototherapy unit and usually require several visits.  These forms of treatments can become quite expensive.  And because indoor tanning increases the risk of skin cancer (especially melanoma), it’s not considered a safe substitute for phototherapy under medical supervision.

Systemic medications. If topical medications and phototherapy don’t work, doctors may recommend taking systemics, or prescription drugs that affect the entire body. These meds can be taken orally or via an injection, and include Cyclosporine (which suppresses immune system activity and slows skin cell growth), Acitretin (an oral retinoid, or form of vitamin A, that slows down the speed at which skin cells grow and shed), and Methotrexate (a medication that was originally used as a cancer treatment, but can also slow down the growth of skin cells).

Biologic drugs. Biologics contain human or animal proteins and can block certain immune cells that are involved in psoriasis. They’re usually recommended for people with moderate to severe psoriasis and are administered via an injection or IV infusion. There are currently three types of biologics that can help treat psoriasis, all of which block immune system chemical messengers that promote inflammation called Cytokines.

An estimated 30% of people with psoriasis will also develop psoriatic arthritis, a disease which causes joint pain, stiffness, and swelling. Having psoriasis may also make people more likely to develop cardiovascular disease, obesity, and diabetes.